Featured Cat of the Month – Amethyst 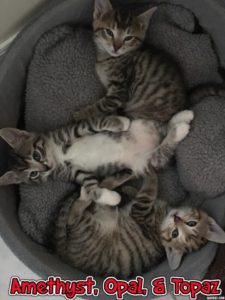 Our sweet little Amethyst is a miracle kitten.

The call came in on February 8. A cat had just given birth to 5 kittens in Keswick – could we help? Although usually full to the brim, we had an experienced foster waiting, so arrangements were made to bring them immediately to our vet. “Oh, and by the way,” said the caller, “there were complications during the birth – the umbilical cord was wrapped around some of the kittens’ little legs.”

And so started this amazing story, initially so sad, but ultimately a triumph for a strong willful kitten who wouldn’t give up.

Our vet examined the mom and kittens and said some had a dangerous bacterial infection. But how do you treat one-day-old kittens? They were too small to draw blood or do other tests. Without treatment, they would not survive; with treatments, they had a chance. So the decision was made and the sick kittens were started on miniscule injections of antibiotics.

It was touch and go for the next five weeks. Vet visits were every two days during that whole period. Pain medications were added to the regime as the infection became very severe before starting to abate. Two of the afflicted kittens passed away within a few days, but Amethyst, who was the sickest, hung on like a little fighter. Amethyst also had consultations with specialists at Toronto Veterinary Emergency Hospital (TVEH). We were advised that, if he survived, he would need one leg amputation…. maybe even two.

Today our little hero is off his medication and the infection is gone. He has an upcoming consultation with a surgeon at TVEH for his malformed foot and to re-assess the requirement for amputation.

Through a miracle, Amethyst survived this very rough start. He romps and plays with his two surviving healthy siblings, Opal and Topaz, as if nothing happened. For those that believe in the power of crystals, amethyst is said to enhance physical health after medical treatments and medications. In ancient times it was said to protect one from poison. Is it possible that Amethyst’s powerful name helped him overcome the poison of the bacterial infection? I guess anything is possible……..

Amethyst is still a baby, but once we get the “all clear” from his vet, we’ll be looking for a fantastic home for him. This little one is sure to bring joy to your life. He is an inspiration!

← Featured Cat of the Month – TC