Featured Cat of the Month: The Mighty Tyke 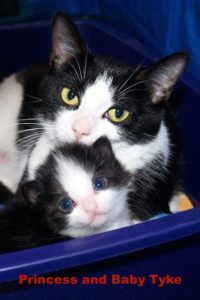 Featured Cat of the Month:  The Mighty Tyke

After being adopted in early June of 2015, Tyke, a (very) long-haired tuxedo was recently surrendered back to Rescue Angels because of  major allergies in the family.  He is back with his original fosters until a new  home is found.  Judging from his personality, this shouldn’t be long.  The following is his updated biography  as it appears in our main site rescueangels.ca.

Hi I’m Tyke. I was surrendered back to Rescue Angels because of major allergies in my family. My fosters who also fostered my Mom (Princess) and me when I was teeny-tiny, say that I’m the closest they will ever get to having a live panda bear. Some humans say that I remind them of someone named Andy Kaufman because of the way I stare at stuff…and people. I am a gentle giant of a cat who loves to be around humans, especially if they’re playing with me or sitting in a comfy spot. I would like to make sure that my new home has some toys I can chase as well as humans that I can love and get loved back.

Please visit rescueangels.ca and complete their online adoption application if I’m the big, huggable, furry hunk in your future.

Tyke and his mother, Princess, certainly had a rough start in life.  Things started to go awry when Princess’ owner asked a neighbour to cat sit for her while she went to Montreal for a few weeks.  The neighbour, highly allergic to cats and knowing very little about cat care agreed.  The owner never returned.  The cat sitting neighbour kept Princess in the basement and was completely unaware that Princess was in the final stages of pregnancy. The neighbour, finally realizing the situation, called Rescue Hamilton Cats. When  RHC arrived at the home, only one kitten was found with the mom.  What happened to the rest of the kittens is unclear.  Rescue Angels responded to RHC’s posting for help and Princess and Tyke became part of the Rescue Angels family.

Safely in foster care, mother and son were carefully monitored. For both momma and kitten, the first two lines of defence were the litter box for Princess and the kitchen scale for tiny Tyke.  The importance of having a small kitchen scale, when kittens are involved, cannot be overemphasized.  Noticing a sudden weight loss in the still fragile kitten, her fosters realized that Princess’ milk supply was drying up. Syringe feeding began until Tyke was able to fend for himself.

Tyke came to us as a the cutest blue-eyed kitten.  According to his foster, “Tyke is now the size of a panda bear who impersonating Latka Gravas  in the old television series Taxi.”  (Indeed, worth googling.) Regardless of size, Tyke, that loveable and goofy kitten still exists in the extra large version. There’s just a lot more to love and hug.